in Freethinkers
Reading Time: 3 mins read
123 3
A A
Share on FacebookShare on TwitterShare on TelegramShare on Whatsapp

The piece “Yo soy libertador” (I’m a liberator) is a portrait of Neomar Lander in acrylic on canvas that I painted in 2017. This art is based on an iconic photography of Neomar taken the same day he died. For many, this image is one of the most symbolic and representative of the rebel spirit  and the thrist for freedom of the venezuelan people, this is the reason I painted it then. This image became viral and iconic, I took advantage of the instruments given by social networks and new technologies to communicate as a way to share an idea and a shared identity for Venezuela. Today, I minted “Yo soy libertador” in NFT format with the objective to actualize and keep alive the memory of Neomar and the cause of freedom using the vanguard of what the blockchain has to offer. 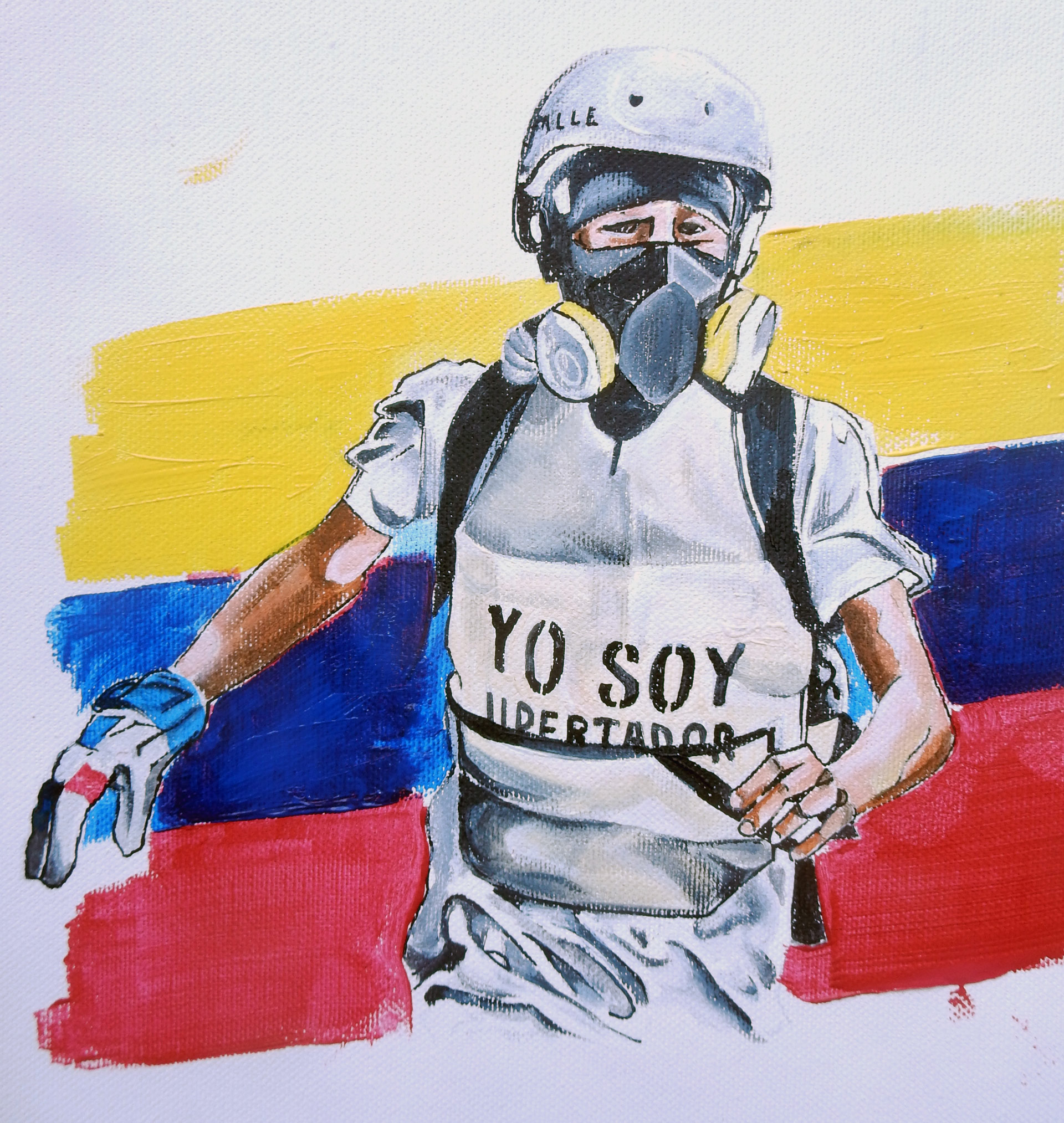 First of all, I would like to offert some context and intention in the road map of this operation “Yo soy libertador”. During the 2017’s protest in Caracas, these courageous young heroes stood in the front lines of an uneven battle. These “Soldados de Franela” (t-shir soldiers) stood up like David against Goliath with flags, creativity, will and rocks against a repressive regime that repressed with weapons, brutality, censorship and death. “The fight of a few serves the future of many”. If it’s true that there were “few” heroes their sacrifice counted for everyone.

This inspired me to paint this young martyr sacrificed on the altar of freedom his “nobility letter” through my pigments. Now, mi project is to transpose it to the digital realm in the #NFT format to use it as an instrument and vehicle to create synergy, reconstruct shared identity (cultural and historical) and promoting the freedom cause in Venezuela. Now the tribute must all exist in pixels! In other words, I move to bring the piece up to date in the form of a “libertarian NFT”. The distribution and promotion of “Yo Soy Libertador” is the objective by itself. This dynamic has no objective to make profit like the speculative pyramidal collections though the idea is to create community and synergy through network creation for a noble cause.

“Yo soy libertador” is one of my most significant pieces of mi #ArteParaLuchar (Art to fight). The concept of “Art to fight” that I’ve been developing integrating militant creation and artistic production ith the proper use of social networks and new technologies of communication. In 2022, the development of the field and possibilities of NFT and smart contracts hints infinite possibilities, therefore, I thought about how could I integrate this ne platforms/technology with the weapon of mass creation that is “Art to fight”? If at first view, this field is mainly used for no in these “Pyramidal schemes”, the part of Art and art “per se” is growing timidly and confronting difficulties. Like all novelty, humans have a tendency to first find their bad, evil and disruptive possibilities, I trust we will give it a positive, just and virtuous use.

My objective with this NFT is to share the most possible. I would love each holder feels it his, that he promotes it feeling like a part of a cause and an emblem that goes and represents something bigger than ourselves. I’m also interested in the pedagogical value of the operation in order to introduce and educate Venezuelans into what crypto values and NFT can offer. This is something that has to be built both individually and collectively. Sometimes, libertarian dynamics that affect us all spark from the will of free spirit individuals. Venezuelans, I’m sure that  e are millions and that we will be free.

Roe, Wade and the American Dream

A few Thoughts About Populism

Latin America: from a time of changes to a change of time

Citizen of the world, born in Caracas Venezuela, lived in Switzerland and now in Italy. I'm an Artist, a human rights militant, a communicator and creator. I have a master in political sciences, speak 4 languages and enjoy analyzing, painting and producing opinion about the world's current affairs.

Vaccinating Children Without Parental Consent is an Attack on the Family

“There can be no keener revelation of a society’s soul than the way in which it treats its children.” Nelson Mandela,...

The history books will judge the 23rd June 2016 as a significant turning point in the future of the UK’s immigration...

Just how far has your betrayal gone, Prime Minister?

‘Never attempt to win by force that which can be won by deception,’ the great political deceiver Niccolo Machiavelli once advised....